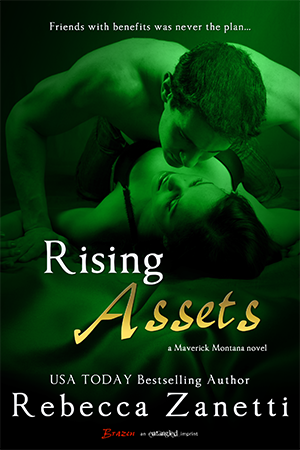 Friends with benefits was never the plan…

Melanie Jacobs is in trouble. With three jobs—including running her ranch—and dwindling funds, she’s exhausted. Not to mention desperately trying to hide a secret. Unfortunately, her best friend Colton Freeze knows all too well that’s something is going on, and he won’t give up until he knows exactly what he needs to fix.

Then Colton learns the truth—that Melanie’s future happiness rests in the fickle hands of fate, and her chances for having a family are shrinking with every passing day. Her only comfort is Colton, but when a heated argument between them turns into an even hotter kiss, the boundaries of their friendship are erased, leaving only a scorching-hot hunger for more.

Every kiss—every touch—is a stolen pleasure. But will their new friends-with-sexy-benefits arrangement bring them closer together, or destroy everything they once shared?

Click to Buy the Maverick Montana Series on Amazon:

USA Today Bestselling Author Rebecca Zanetti has worked as an art curator, Senate aide, lawyer, college professor, and a hearing examiner - only to culminate it all in stories about Alpha males and the women who claim them. She writes dark paranormals, romantic suspense, and sexy contemporary romances.

Growing up amid the glorious backdrops and winter wonderlands of the Pacific Northwest has given Rebecca fantastic scenery and adventures to weave into her stories. She resides in the wild north with her husband, children, and extended family who inspire her every day--or at the very least give her plenty of characters to write about.

Protecting What's Theirs (Line of Duty #1.5) 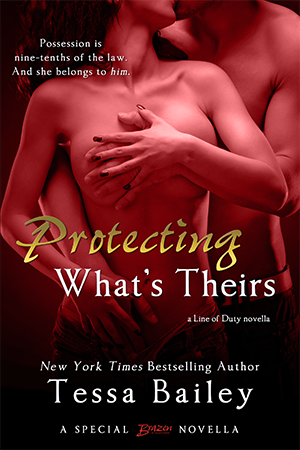 Possession is nine-tenths of the law. And she belongs to him.

Ginger Peet has never regretted leaving Nashville with her sister and their life-sized statue of Dolly Parton. Now she’s settled in Chicago with Lieutenant Derek Tyler, spending her nights pressed against every inch of his hard, dominating, and panty-meltingly-hot body.

And there’s nowhere Derek would rather be than reminding Ginger—thoroughly and exquisitely—that she belongs to him. But then trouble hits the streets of Chicago. The kind of bust the old-school boys call a "widow-maker." To keep Ginger safe, Derek’s forced to shut her out and keep himself away from her luscious body, or risk losing her forever.

But Ginger has just been presented with some, er, unexpected news. And right now, it’s best she keeps that news to herself. Because Derek stands to lose far more than he knows, until he takes the law—and Ginger—into his own hands one last time...

Click to Buy the Line of Duty Series on Amazon: 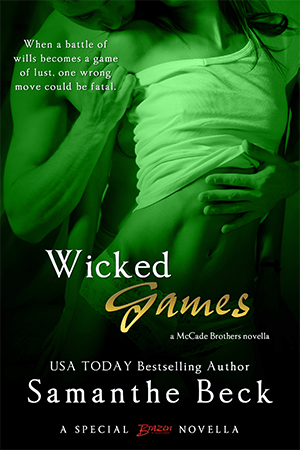 When a battle of wills becomes a game of lust, one wrong move could be fatal.

Actress Stacy Roberts is ready to ride her rising star straight to Hollywood’s A-list. All she needs is the famous Hollywood Hedonism party (check), one very naughty angel costume (check), and a few drinks to get her sexy swagger back (check, check). Tonight, she is not aching for her hot, hard-bodied ex. Or worrying about the threatening letters signed by "Your Worst Nightmare."

For Detective Ian Ford, "nightmare" doesn’t begin to cover it. Whatever demons prompted Stacy to cut and run have him tied up in knots. Worse, his ex is dressed to kill any man with a pulse, and Ian is seeing red. If Stacy wants trouble, she’ll find it. Only Ian’s going to make damned sure that the only trouble she gets is with him.There are no rules. They either both win, or they both lose. But this time, there’s an extra player—one who’s determined to make sure this is the very last game Stacy plays…

Click to Buy the McCade Brothers Series on Amazon:


A Cali girl by way of Georgia, Puerto Rico, Maryland, and Manhattan, I'm a wife, a mom, beleaguered custodian of Bebe the trash talkin’ Chihuahua. Last, but not least, I'm a writer of fun, sexy contemporary romances for Entangled Publishing, for their … ahem … Brazen line! 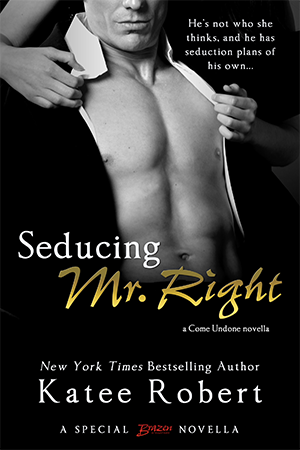 He’s not who she thinks, and he has seduction plans of his own…

Danielle Kastien is done with powerful men. After months of near-saintly behavior, she’s determined to use the company costume party to have her wicked way with every delicious inch of the sexy-but-sweet mail guy she’s been meeting for coffee. Though her costume is designed to send him into a haze of blind lust, Danielle quickly realizes Grayson is not the kind of man she can control.

Grayson Harper is used to having his way at work and in the bedroom. He’s dominant. Commanding. Obeyed. He’s been patiently biding his time with Danielle, enjoying spending time with someone who sees him as someone other than the CEO of Harper Industries. But before he can confess, he has Danielle right where he wants her. Where he’s wanted her since the day they met. And he’s in far too deep to risk his claim on the one woman who makes him hard with need...

Click to Buy the Come Undone Series on Amazon:

Katee Robert learned to tell stories at her grandpa’s knee. Her favorites then were the rather epic adventures of The Three Bears, but at age twelve she discovered romance novels and never looked back.

Though she dabbled in writing, life got in the way—as it often does—and she spent a few years traveling, living in both Philadelphia and Germany. In between traveling and raising her two wee ones, she had the crazy idea that she’d like to write a book and try to get published.

Her first novel was an epic fantasy that, God willing, will never see the light of day. From there, she dabbled in YA and horror, before finally finding speculative romance. Because, really, who wouldn’t want to write entire books about the smoking-hot relationships between two people?

She now spends her time—when not lost in Far Reach worlds—playing imaginary games with her wee ones, writing, ogling men, and planning for the inevitable zombie apocalypse.