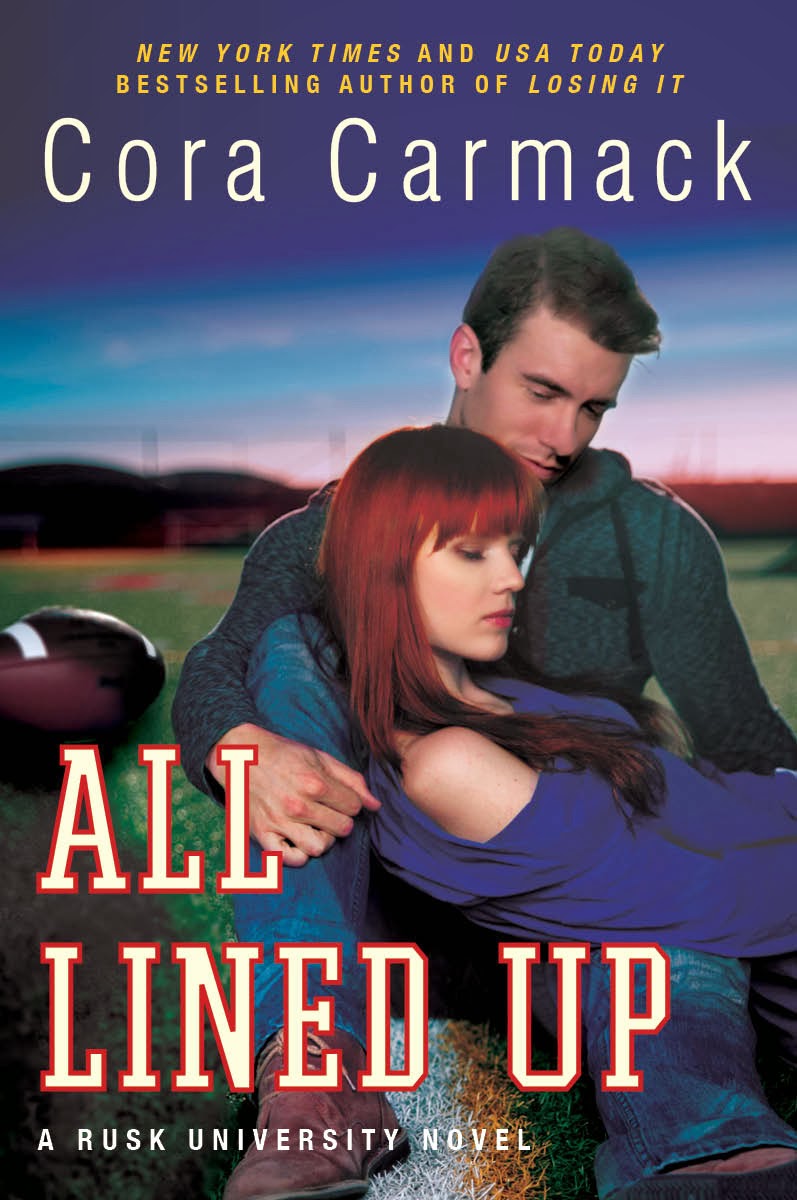 In Texas, two things are cherished above all else—football and gossip. My life has always been ruled by both.

Dallas Cole loathes football. That's what happens when you spend your whole childhood coming in second to a sport. College is her time to step out of the bleachers, and put the playing field (and the players) in her past.

But life doesn't always go as planned. As if going to the same college as her football star ex wasn’t bad enough, her father, a Texas high school coaching phenom, has decided to make the jump to college ball… as the new head coach at Rusk University. Dallas finds herself in the shadows of her father and football all over again.

Carson McClain is determined to go from second-string quarterback to the starting line-up. He needs the scholarship and the future that football provides. But when a beautiful redhead literally falls into his life, his focus is more than tested. It's obliterated.

And neither of them knows how to walk away from the attraction they feel.

Reading All Lined Up, the first book in Cora Carmack’s Rusk University series, reminded me exactly why New Adult has become me go-to genre. It has a bit of everything that I love in a book, including a burgeoning romance between two likable characters, an eclectic cast of supporting characters/potential protagonists in future books in the series, a bit of drama to keep things interesting. Protagonists Carson and Dallas are two young adults, navigating through unfamiliar territories, both in their romantic and personal lives, and trying to discover who they are as individuals and as a couple.

I have read all of Cora Carmack’s novels and while I’ve loved them all for various reasons, All Lined Up is my favorite of the bunch because of the memorable cast of characters that enliven every page of the story. The narrative is relatively straightforward, following the two main characters as they experience the trials and tribulations of coming-of-age, which results in All Lined Up having a character-driven plot. The personalities and quirks of Dallas, Carson and every supporting character are thoroughly fleshed out so that each individual is distinguished by what they bring to the story.

I particularly appreciated how well we get to know both Carson and Dallas. The more details I learned about their lives - whether it was a simple fact related in passing or a major plot point - the more I connected with them and the more real they became. Dallas is one of the most entertaining heroines I’ve encountered, mainly because of her hilarious tendencies towards social awkwardness but also because I sympathized with her internal struggle to find herself. Her character is the type of person I'd want to be friends with in real life; we'd bond over our mutual dislike of college parties and our unabashed appreciation for sexy muscled athletes.

Maybe it’s because I grew up in Texas so I’m familiar with the related hysteria, but the football-centric plot of All Lined Up was an entertaining addition to the New Adult genre. All Lined Up is the perfect introduction to the Rusk University series, allowing readers to vicariously experience the butterflies-in-the-stomach feelings of a fledgling relationship, slowly building upon the connection between Carson and Dallas as they transition from strangers to friends to something more. With All Lined Up, Cora Carmack effortlessly captures the all-consuming phenomenon that is Texas football, while also injecting a sweet, yet steamy romance between the two lead characters. I can’t wait to see what’s in store for Silas, a.k.a. Rusk University’s resident bad boy, as he steps to the forefront of the narrative in All Broke Down.


Cora Carmack is a twenty-something writer who likes to write about twenty-something characters. She's done a multitude of things in her life-- boring jobs (like working retail), Fun jobs (like working in a theatre), stressful jobs (like teaching), and dream jobs (like writing). She enjoys placing her characters in the most awkward situations possible, and then trying to help them get a boyfriend out of it. Awkward people need love, too. Her first book, LOSING IT, is a New York Times and USA Today bestseller.

Hey everyone! I'm so excited to be here today! Last week was sort of a whirlwind for me...I went to the RT convention in New Orleans, which was so much fun, and while I was there, my newest book released! It's called ALL LINED UP, and it's the first book in my Rusk University Series. ALU tells the story of Dallas Cole, a coach's daughter who has spent her life coming in second to football, and Carson McClain, a second string quarterback doing everything he can to work his way to the top. They meet at a frat party. Wackiness and chemistry ensue. From what I've seen on Facebook and Twitter, a lot of you guys have already gotten the chance to read it - thank you all so much!! If you haven't read it yet (darn those real world responsibilities, getting in the way our To Be Read lists), it's currently on sale for $1.99 at Amazon, Barnes & Noble and iBooks ! I thought it would be fun to get to know a little more about some of the characters from ALU, so they've kindly dropped in to talk about some of their favorite things. (Sound of Music reference FTW!)

Favorite TV Show:
Carson: Doctor Who. It's Dallas's favorite too. No matter what she says.
Dallas: It's not. Dance Moms all the way.
Stella: The Mindy Project. I want to steal Mindy Kaling's life.
Ryan: 24. Two words: Jack. Bauer.

Favorite Book:
Carson: I haven't read much lately. Maybe Bleachers by John Grisham? Let Dallas pick for me.
Dallas: The Awakening by Kate Chopin. And Carson's favorite is 1984. He hasn't read it. But I'll make him. :)
Stella: something deliciously smexy. I'm not picky.
Ryan: the Jack Reacher series by Lee Child. Because they're badass. I'm badass. It fits.

Favorite Movie:
Carson: Gotta go with Rudy.
Dallas: Center Stage. It's simultaneously awful and wonderful.
Stella: Mean Girls. DEFINITELY. That book speaks to my soul.
Ryan: Is it weird if I say the Lego Movie? That thing was actually pretty good.

Favorite Food:
Carson: All of it.
Dallas: Fried Chicken. Oh God how I miss it! Being on a dance diet sucks.
Stella: Does tequila count?
Ryan: I'll take a 6 foot long sub sandwich please. We are ordering, right?

Favorite Ice Cream:
Carson: Rocky Road
Dallas: *weeps quietly* *curses her metabolism*
Stella: Mint Chocolate Chip. Sweet with a bit of kick. Just like me, minus the sweet part.
Ryan: I once had Guiness ice cream at a place called Amy's Ice Cream in Austin. So. Damn. Good.

a Rafflecopter giveaway
Posted by Nose Stuck in a Book at 7:00 AM