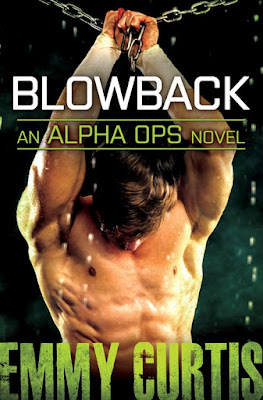 One year ago, David Church kissed a beautiful, brilliant woman on an airfield in Iraq—and hasn't stopped thinking about her ever since. Now, the military veteran gets a chance to rekindle that fire when he sees his lost love again—looking sexier than ever—at an international conference in Athens. David yearns to take her in his arms, to hold her close and never let go. But when the bullets begin to fly, it's not just his heart on the line. It's his life.

When Molly Solent agreed to deliver intelligence for the U.S. government, she didn't realize she'd be caught in the crossfire of a surprise ambush—and underneath the hard-muscled body of David Church. Shielding her from harm and swearing to protect her, the elite bodyguard reignites a searing passion that Molly can't resist. But with unforeseen danger around every corner—and unquenchable desire in every embrace—falling in love could be the greatest risk of all...

Click to Buy the Alpha Ops Series on Amazon:


Emmy Curtis is an editor and a romance writer. An ex-pat Brit, she quells her homesickness with Cadbury Flakes and Fray Bentos pies. She's lived in London, Paris and New York, and has settled for the time being, in North Carolina. When not writing, Emmy loves to travel with her military husband and take long walks with their Lab. All things considered, her life is chock full of hoot, just a little bit of nanny. And if you get that reference...well, she already considers you kin.

Hell, he looked good. All these months waiting for him, and he was just here.

When she first really laid eyes on him, she was peeking at him through a window as he took an impossible shot into a trailer and saved them. He’d been drunk, and impossible. And she’d wanted him so much. Wanted to save him, to make him feel better. To stomp on whatever demons were keeping him from participating in reality. To run her fingers through his short dark hair. His eyes had been so sad, and he’d seemed resigned. Like he’d already given up on life. In that second he’d broken her heart, as he’d saved her life.

It hadn’t hurt that he was tall, and built in the way only a career combat military guy could be. Broad shouldered, with hard arms that she just wanted to be wrapped in. When his dark eyes had rested on hers, the hard lines on his face faded, and although his lips remained pressed into a hard line, his eyes had smiled at her. She thought. Maybe she hoped.

She wanted to touch his face. To kiss him. To understand what had happened to him, and what had changed. And he had changed. He seemed more in control, sober, obviously. He spoke with a lower voice. Seemed less…something. She couldn’t put her finger on the change. Her hand reached out to him, but she snatched it back before she could touch him.

She was on a mission. She was supposed to destroy the envelope she didn’t use, but in the end she hadn’t had time to give him either of the messages, so she figured she should keep them, but everything was getting confused in her mind. Should she destroy them both? Is there someone else she should give the message to? She had to keep working through the problem. If she stopped, she feared she’d break down and might never be able to pull herself together. She didn’t want him to witness that. She clenched her fists.

“He’s the Russian Minister of Antiquities. Alexandre Doubrov. Why would someone…?”

“I have no idea,” he said leading her back to the bed. “But you’re not going anywhere. There was no way he’d have been able to survive that shot. I’m sorry.”

She nodded but said nothing. He’d died right in front of her. Poor Alexandre. She had to get hold of Brandon to tell him she’d failed. But she wanted the whole picture before she called him. She yawned. Suddenly sleepy.

“So what have you been doing this past year?” David said, his voice seeming miles away.

Her mind immediately went to the airport at Iraq, as it had a million times before. He’d grabbed her and roughly pulled her into his arms, telling her that he would find her and come for her. Then he’d kissed her forehead hard and departed with his old team of explosive experts on a mission, leaving her to return to the states. Damn him.
Posted by Nose Stuck in a Book at 5:00 AM