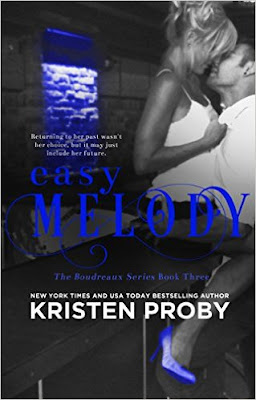 Callie Mills never intended to return to New Orleans and the life she left behind more than a decade ago. There was no need to open old wounds when she had the life she’d worked hard for in Denver. But when she’s fired from her awesome job in Colorado and her father dies, she has no choice but to return home to run the derelict bar left to her in the heart of the French Quarter. Callie must not only face bad memories but turn The Odyssey into something she can be proud of.

And who better to help bring in crowds of people than Declan Boudreaux?

Declan is a sought-after musician who knows he’s good at what he does and loves doing it. Known to pack the house, he also loves women and doesn’t expect to be knocked back a step by the beautiful new owner of The Odyssey. Callie is sharp, gorgeous and funny, and makes him yearn for something he never has before… Commitment.

But when Callie’s able to turn the business around with renovations, making it one of the hottest bars in the Quarter, will she sell out and leave her past behind once and for all, or will Declan be able to convince her that’s she’s where she needed to be all along…in his arms.

Kristen is the author of the Amazon and USA Today bestselling With Me In Seattle series. She has a passion for a good love story and strong characters who love humor and have a strong sense of loyalty and family. Her men are the alpha type; fiercely protective and a bit bossy, and her ladies are fun, strong, and not afraid to stand up for themselves.

Kristen spends her days with her muse in the Pacific Northwest. She enjoys coffee, chocolate and sunshine. And naps.

It’s still early in the evening, but it’s not a typical busy night, and I’m hoping I’ll be able to get Callie alone, even if it’s just for a few moments so I can talk to her. I don’t want to wait until later tonight to walk her to her car.

I walk in and sigh in relief. It’s slow in The Odyssey, with just a few tables occupied, and a couple of guys at the bar. The roof is closed, which tells me it’s been mellow all day.

As I walk toward the bar, I see Callie at the far end talking to a tall suit-type who’s handing her flowers.

“Oh, Pete, you didn’t have to do that.” She’s smiling as she buries her nose in the blooms.

“Well, dinner out just hasn’t worked out, so I decided to come to you.”

Who the fuck is this?

“We’ve both been busy,” Callie says as she shifts her gaze and finds me standing not far behind Flower Boy. Her eyes widen and her cheeks pinken. I stand firm, cross my arms over my chest, and watch unapologetically.

“I know things ended between us a long time ago,” the dude continues, “but I’ve never forgotten you, Cal. Let me take you out, like old times.”

“Adam can get you a drink. We’re having a conversation,” Pete says, obviously pissed at being interrupted.

I bet he’s been practicing his speech for a week.

“I’ll be back,” she says to Pete, then walks around the bar and motions for me to follow her. As soon as we’re in her office, I close the door and move her against it, caging her in.

“Is he who you want, Callie?” I’m panting, adrenaline taking over. Callie’s blue eyes are wide and pinned to mine. She’s gripped on to my shirt over my ribs, holding on tightly. “Say he is, and I’ll leave right now.”

She blinks once, then again.

“That’s what I thought,” I plunge one hand into her soft hair, fist my hand in it and tilt her head back, and kiss her. Hard. She moans, long and deep, pulling me to her with those hands, and I’m lost in her. Our tongues explore each other, and then I nibble the corner of her mouth and kiss her softly. “I’m tired of trying to keep my hands off of you,” I murmur, my lips still against hers.