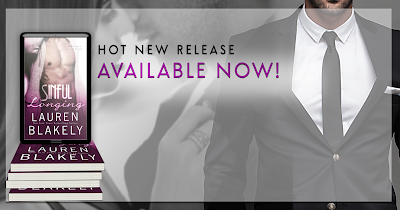 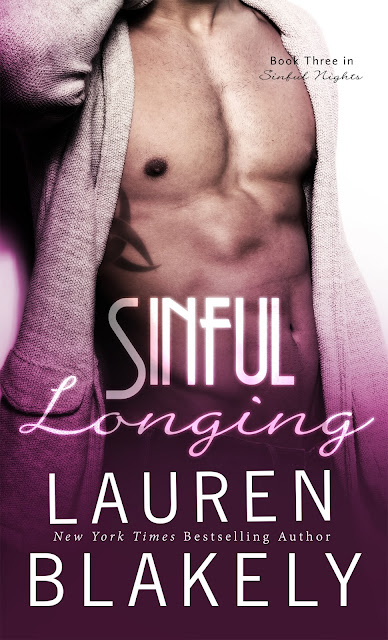 He's the inked brother. The one you're wondering about. The bad boy of the family. Colin Sloan has a past. He's done things he's not proud of, but he's living differently now. Making changes in his life. Working hard, working out harder, and trying to win over one woman. He's utterly crazy about Elle Mariano, and though the sex is epic, their friends-with-benefits arrangement just isn't cutting it anymore. He wants all of her, and is determined to prove he's what she needs in her life.

Elle is fiery, loyal, and in major lust with Colin Sloan. He's everything she craves in a man -- smart, sexy, kind -- and a rock star between the sheets. But his past hits too close to home for her, and the people she has to protect. There isn't room in her life for a relationship with Colin. Especially when she's forced to keep a secret that could tear his family apart...

Click to Buy the Sinful Nights Series on Amazon:

“Do you like the music?” he whispered, his lips so close to her skin. Goose bumps rose on her flesh as she blinked open her eyes.

He raised a hand to adjust his tie—he was always doing that, as if ties weren’t his thing—and her gaze settled on his fingers.

Magic fingers, she called them. She knew what they could do to her.

“Yes, I like the music,” she said, trying to center herself.

“I do, too,” he said softly, then stroked his chin. “It’s beautiful. And it reminds me of something.”

She raised an eyebrow. “What does it remind you of? Some other piece of music?” She hadn’t known him to be a classical fan. He was rock, alternative, and indie music all the way.

He shook his head. “Not music. But something else I enjoy. Trying to remember exactly what.”

“Tell me,” she whispered, her curiosity now piqued. Her eyes met his. She searched those dark brown irises, as if she could find the answer there.

The sounds from the stage grew louder. “Wait. I think I know.”

She widened her eyes, and held out her hands as if to say tell me now.

“Turn back to the stage. It helps me think.”

She shot him a look, because that made no sense. Shrugging, she returned her focus to the musicians and the victorious sound of the final movement of Beethoven’s Ninth.

“Ah, that’s it,” Colin whispered. “Now I remember. It reminds me of that thing you like so much.”

His fingers gently traveled up her neck. A small gasp escaped her lips. “Your neck. The way you move when I kiss you right here,” he said, stopping to trace the outline of one of her birds with the pad of his thumb. She nearly moaned out loud. Elle was convinced every woman had a spot on her body that melted her from head to toe when touched the right way by the right man.

For Elle, it was her neck.

“How you sound when I touch your shoulder,” he continued, letting his fingers graze her collarbone. Her bones turned liquid. Any ounce of resolve still left in her evaporated. She could say it was the thrill of the night, that it was the joy of hitting a massively vital professional goal, or perhaps it was the fact that no one had made her feel this way in years.

But none of that was true.

It was him. He just did something to her.

A shiver rolled down her spine. “No, it doesn’t sound like that at all,” she said, trying faintly to deny the way she responded to him.

He nodded vigorously. “Yes, it does. Just listen to that crescendo. It sounds like you when I— ”

She grabbed his thigh and dug in her nails. The contact silenced him, but reminded her of how much she liked contact with him.

Being so close to him was an injection of lust in her bloodstream, and Elle knew what happened when she was ruled by lust. She knew it well, and she had the lifetime of upended choices to show for it.

Not that she regretted anything in retrospect.

But she was older and wiser now. Wasn’t she?

She must be, because that wisdom was jostling its way to the front of her brain, trying to strike a deal with her body. They’d tangoed, they’d played—they’d done plenty. But she’d only fully had this man a few times. Maybe one more time and she could finally eradicate him from all her thoughts, from the dirty dreams that lasted all night and lingered too long during the day. She could say good-bye to these rampant hormones, and concentrate on her job, her family, and her promises.

There was no reason not to enjoy the final minutes of this evening to the fullest. One last night of passion, then she could move on from this turbulence of longing that engulfed her every time Colin Sloan was near. Let go of the longing, let go of him.

She couldn’t have him in her life, but she could have one more night.

The concert ended, and the crowd applauded; their clapping and cheering rang through the ballroom.

Seize the night. She turned to face him. Arched an eyebrow. Took on his challenge.

Forget poker. She had other plans now. “So what’s the new tattoo, Colin? You ready to show me?”

heart, and humor, and her books have appeared on the New York Times, USA Today, Amazon, Barnes and Noble, and iBooks bestseller lists. Like the heroine in FAR TOO TEMPTING, she thinks life should be filled with family, laughter, and the kind of love that love songs promise. Lauren lives in California with her husband, children, and dogs. She loves hearing from readers! Her novels include Caught Up In Us, Pretending He's Mine, Playing With Her Heart, Trophy Husband, and Far Too Tempting. On November 21, she'll release the edgy new adult novel THE THRILL OF IT. She also writes for young adults under the name Daisy Whitney.


With each new release in the Sinful Nights series, Lauren Blakely manages to find new ways to capture and hold the reader's attention with increasingly sexy stories of love and lust, a cast of characters that are both familiar and engaging, and an ongoing suspense-filled plot that keeps you guessing with each new revelation. The third book in the series, Sinful Longing, includes not only a scorchingly hot new romance between protagonists, Colin Sloan and Elle Mariano, but a number of twists and turns that broaden the mystery still surrounding the Sloan siblings. Like its predecessors, Sinful Longing is the type of steamy that causes flushed cheeks and glazed eyes, although the connection between Colin and Elle is entirely unique to this couple. Sinful Longing is Lauren Blakely at her finest as she gives readers a romance brimming with sensuality and seduction.

After being introduced as the tattooed bad boy Sloan brother, I had certain expectations about Colin and I’m thrilled to say he met every one. A hero whose sole intent is to seduce the object of desire? It was indescribably sexy watching him and Elle engage in a battle of wills, with Colin determined to knock down the walls she carefully constructed in an attempt to keep their relationship strictly physical. Elle came as a pleasant surprise, mostly because her character was so complex that I couldn’t predict how she would think or act in any given situation. The more I got to know her character, discovering her thoughts and motivations, the more I empathized with her hesitations. That’s not to say I wasn’t not-so-silently rooting for their happily ever after (because I was).

In case it escaped your notice, I revealed next to nothing in regards to the plot. Every minute of this heart-pounding, breath-catching thrill ride should be experienced firsthand and I feel like revealing anything about the characters’ situations would take away the element of surprise. Sinful Longing is first and foremost a love story about taking chances and learning to trust, but it’s also a fast-paced mystery that poses as many questions as it answers. After an ending that had me screaming aloud in disbelief, all I have to say to Lauren Blakely is…well played.

*complimentary copy provided by author in exchange for an honest review