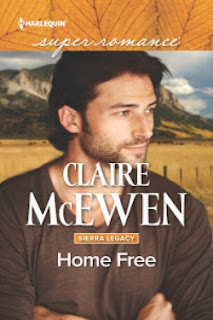 His first taste of freedom was only the beginning...

Arch Hoffman has paid for his crimes. All he wants is to come home to rural California and start over. He's not looking to be a hero when he rescues a wedding cake from hitting the dirt at the ranch next door. But culinary artist Mandy Allen's irresistible smile makes him glad to save the day--and thankful that they're neighbors.

Mandy's just the distraction Arch needs. Her sweet voice quiets the memories that threaten his chance to be a better man, and he's determined to help her confront her fears. But the past is its own prison, and even love might not be enough to set them free.

Click to Buy the Sierra Legacy Series on Amazon:

Claire McEwen lives by the ocean in Northern California with her husband, son and a scruffy, mischievous terrier. When not dreaming up new stories, she can be found digging in her garden with a lot of enthusiasm but, unfortunately, no green thumb. She loves discovering flea-market treasures, walking on the beach, dancing, traveling and reading, of course!


A flicker of motion across the black backs of the cattle caught Mandy’s eye. Dark hair under a brown cowboy hat. Long legs in faded jeans. Shoulders wide under his padded canvas jacket. Arch Hoffman.

He was standing on the rail of the fence, waving with both arms to get her attention. She rolled down the window. “Hey,” she called, knowing that it didn’t matter what she said. There was no way she was getting out of this situation without looking like an idiot.

“Not much,” she called back in a lame attempt at nonchalance. “What’s up with you?”

She could see the confusion on Arch’s face even from this distance. He probably hadn’t been expecting small talk. “Um, not much. You need a little help there?”

She forced a breezy voice. “I’m okay...just need to get out of this truck and get feeding.”

“Oh.” He paused for a moment, as if trying to come up with the right words. “It’s just that...you fell into the cab.”

How long had he been there, watching her make a fool of herself? “Oh, ya know, just lost my balance for a minute.” It was almost impossible to sound casual while yelling over the ruckus of forty upset steers.

Arch jumped off the fence and Mandy lost sight of him. She had a tiny moment to hope that he’d decided she was fine and was gone on his way. Then she saw him swing up on the back of a big black gelding and guide it along the fence to the gate. Leaning gracefully from the saddle, he let himself into the pasture, closing the gate behind him.

Mandy reached for the door handle, but her hand was shaking so hard she couldn’t grasp it. She wanted to get out and face Arch while tossing hay out of the truck like a pro. But fear had its cold claws sunk in deep.

With a wave of his rope, Arch cleared the steers easily from his path. He took their place at her truck window, looking down at her from his relaxed perch in the saddle. “Do you want me to feed them?”

His voice was a balm of gentle concern that almost brought out the tears fizzing hot beneath her eyes. She felt her cheeks heat, too, and knew her usually pale skin had gone scarlet. She couldn’t answer. But she nodded.

She watched him in the side mirror as he guided his horse alongside the vehicle and leaned over, grabbing a few flakes of the hay she’d stacked there. He threw them to his right and several of the steers trotted toward the pile. Quickly he grabbed more hay and tossed it out behind the truck, creating another feeding area. Soon the pasture was littered with piles of hay surrounded by happy cattle. Mandy buried her face in her hands. He made it look so simple.