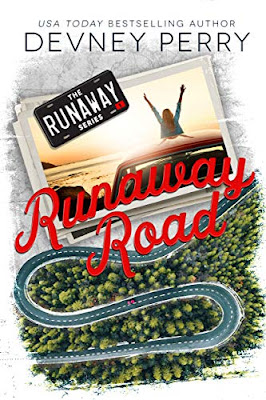 
Londyn McCormack didn’t have a typical childhood. She ran away from home at sixteen, escaping parents more interested in drugs than their daughter. She doesn’t have loving siblings or an adorable pet. Her only family is the five other runaway kids who shared her junkyard home.

Life pulled them all in separate directions, taking her to Boston. For a short time, she thought she’d found something permanent. But after a devastating divorce, she’s running away again, this time to find a lost friend.
She’s driving across the country in her convertible. As a teenager, the rusty car was her shelter. As an adult, it’s her ride to freedom.

Except one flat tire derails her trip. Her life collides with Brooks Cohen. They walked away from the first crash. The second might destroy them both.

“When was the last time you had pie for dinner?”

Her fork dove into the chocolate cream. She hummed and her eyes drifted closed when the bite passed her lips. She savored it, rolling it around in her mouth. The woman had a talented tongue—lucky pie. She moaned again, torturing me with the subtle sound.

She swallowed, then shot me a smile that was pure sex. “You’re missing out.”

I snapped my fingers, raising my hand in the air to flag down the waitress. When she came over, I pointed to Londyn’s plate. “I’ll have that.”

It's always exhilarating when one of my favorite authors starts a brand new series so I was eager to get my hands on Runaway Road by Devney Perry. A book about a former runaway on a post-divorce road trip piqued my interest because of its unique concept. Runaway Road is a journey into the unknown, which, combined with the small-town romance trope (a trope that Devney Perry excels at writing, I might add), gives the story a feel that's both refreshing and comforting. Ultimately it's the intensely swoon-worthy, sweep-you-off-your-feet love story that makes Runaway Road such an unforgettable start to the Runaway Series.

After a messy divorce leaves her feeling emotionally adrift, Londyn McCormack leaves Boston to set off on a cross-country road trip in search of an old friend she knew as a teen runaway. Spending the past eight years transforming into a polished, unrecognizable version of herself sets her on a journey of self-rediscovery. Her road trip comes to an unexpected stop when a flat tire lands her in a quiet town in West Virginia, putting her in the path of a handsome garage owner named Brooks Cohen. Sparks fly as the two share an instant, lust-filled attraction, but Londyn’s temporary stay in town is constantly at the back of their minds, especially as their connection grows deeper.

I don’t think I’ve ever devoured one of her books as fast as I did Runaway Road. I zipped through the pages, so riveted by Brooks and Londyn’s story that I rarely came up for air. Not only does the narrative flow effortlessly, but the romance between Brooks and Londyn is without a doubt one of the most sensual, thrilling love stories I’ve ever read. There’s so much desire and sexual tension between them that it creates an air of heightened expectation. I was on the proverbial edge of my seat, eager to read their every interaction, dissecting every word and action. The chemistry between them is so potent that it’s impossible not to get swept up in that butterflies-in-the-stomach feeling of a budding romance. Theirs is a whirlwind romance that had me alternating between blushing and swooning and I loved every single minute.

With characters that are complex, compelling, and likable, a narrative that’ll tug on your heartstrings one minute then have you smiling widely the next, and a hopelessly romantic love story that’ll have you rooting for a happy ending, Runaway Road is my idea of a perfect book. I was torn between wanting to stop and savor the book and wanting to speed through it to find out what happened next. Considering I finished in a matter of hours, you can probably guess which impulse won. Runaway Road is my new favorite book by Devney Perry and I can’t wait to see where she goes next with this series.