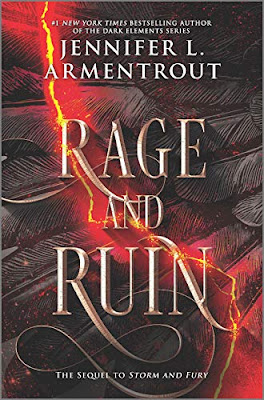 Half-angel Trinity and her bonded gargoyle protector, Zayne, have been working with demons to stop the apocalypse while avoiding falling in love. The Harbinger is coming…but who or what is it? All of humankind may fall if Trinity and Zayne can’t win the race against time as dark forces gather.

As tensions rise, they must stay close together and patrol the DC streets at night, seeking signs of the Harbinger, an entity that is killing Wardens and demons with no seeming rhyme or reason. Forbidden to be with each other, Zayne and Trinity fight their feelings and turn to unusual sources for help—the demon Roth and his cohorts. But as deaths pile up and they uncover a sinister plot involving the local high school and endangering someone dear to Zayne, Trin realizes she is being led…herded…played for some unknown end. As anger builds and feelings spiral out of control, it becomes clear that rage may be the ruin of them all.

All the rumors you heard about her state aren’t true.

Well, mostly. When she's not hard at work writing, she spends her time, reading, working out, watching zombie movies, and pretending to write.

She is the author of the Covenant Series (Spencer Hill Press), the Lux Series (Entangled Teen), Don't Look Back (Disney/Hyperion) and a yet untitled novel (Disney/Hyperion), and new YA paranormal series with Harlequin Teen.

Jennifer also writes New Adult and Adult romance under the pen name J. Lynn. The Gamble Brothers Series (Tempting the Best Man/Tempting the Player) and Wait for You. Under her pen name, she is published with Entangled Brazen and HarperCollins.

After the action-packed, revelatory final chapters of Storm and Fury, I was both excited and nervous to discover what would come next in the second installment in Jennifer L. Armentrout’s Harbinger Series. Rage and Ruin picks up where Storm and Fury left off, leaving Trinity to deal with the fallout of her Protector, Misha’s, betrayal, as well as her newfound connection to Zayne. The threat of their previously unknown assailant, the Harbinger, is at the forefront of their daily lives and looming ever closer, but there’s still much Zayne and Trinity don’t know about who or what they could potentially come up against.

As Trinity’s new Protector, Zayne’s life is inextricably tied to hers. Armed with the knowledge that a mysterious enemy plans to bring forth the end of days, Zayne and Trinity are not only training for an imminent battle, but are busy attempting to piece together the missing puzzle pieces that would reveal the Harbinger’s plan. Throw in the unwelcome knowledge that the prospect of a romance between them is suddenly forbidden, and you have one seriously complicated situation.

After finishing Storm and Fury, I had so many questions. While Rage and Ruin answers some of those questions, even more questions took their place! To avoid spoilers, I won’t say more about the plot, but if, like me, you were hoping for progress on the romance front, Rage and Ruin doesn’t disappoint. Zayne and Trinity continue communicating via snarky, argumentative banter that’s rife with sarcasm and sexual tension. Sooo much sexual tension. As much as they try to fight their growing attraction, their budding romance is a constant source of angst and frustration. Their feelings for each other are like a roller coaster, with enough twists and turns and highs and lows to have my emotions spiraling out of control.

With a plot jam-packed with action, danger, and suspense, characters that make a lasting impression, no matter their level of importance, and a forbidden romance that’s a level of epic that only Jennifer L. Armentrout can deliver, Rage and Ruin is an unforgettable sequel to Storm and Fury. It might even be...dare I say it...better than its predecessor. And with a jaw-dropping cliffhanger ending that will leave you with the mother of all book hangovers, the author ensured Rage and Ruin is a book I’m not likely to stop thinking about any time soon.