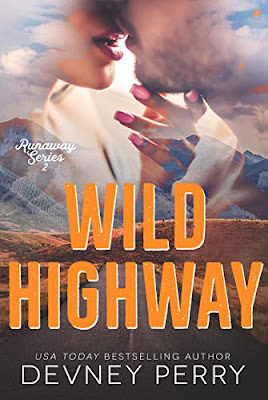 
Gemma Lane built an empire. Not a small feat, considering her home as a teenager was a makeshift tent in a California junkyard. She’s dedicated her life to turning pennies into millions. She has power, fortune and prestige.

And she’s leaving it all behind.

Gemma is headed across the country in her best friend’s Cadillac when a detour in Montana reunites her with old acquaintances and a man who hasn’t changed. Easton Greer challenges her every word and tests her every limit because he doesn’t believe she’s really abandoned her riches. She ignores his snide remarks and muttered censure—until the day she’s ready to return to the wild highway, and Easton taunts her to stay.

She’ll prove to him she’s not just running back to her wealthy life, that she’s more than her money. She’ll unlock her guarded heart and hope that this time around, he’ll treasure the key.

I opened the door, a smile still on my face, and collided, headfirst, with a wall of muscle.

“Oh, sorry.” I looked up and my heart stopped.

The smell of leather and aftershave filled my nose. I looked up to see a pair of dark brown eyes hooded by long, onyx lashes. I took in the straight nose, the sharp jaw and strong chin. My gaze dropped to the full lips I’d tasted once, on a night eleven years ago.

I’d never seen a face as symmetrical and so beautifully masculine as Easton Greer’s.

Even when he scowled, like he was now, it was a wonder.

He’d gotten even more handsome. How was that possible? He’d transformed from a young man to just a man, man. Rugged and rough and sexy.

“Gemma.” My name came out as a growl in his deep voice and I tore my gaze away from his mouth, taking a step back.

“Hi,” I breathed, the air heavy and thick.

He took a step away, then another, his glare unwavering.

Easton cast his scowl over his shoulder and spotted the Cadillac. “That yours?”

“You’re staying here.” Not a question. An accusation. If he had it his way, I’d be uninvited.

I lifted my chin. “Yes, I came to see Katherine.”

His jaw ticked. “I thought we’d gotten rid of you years ago.”

Ouch. I guess he was still pissed about that whole sex in his room and waking up to find me gone.

But, good or bad, he hadn’t forgotten me.

Having been blown away by Runaway Road, I was particularly excited to read Wild Highway, the second installment in Devney Perry’s Runaway Series. My eagerness was partly due to the fact that I will gladly devour anything Devney Perry writes, and partly because I’m more than a little obsessed with second chance romances. I don’t know what it is about them, but they’re often hopelessly romantic and gut-wrenchingly emotional, thanks to the already-established history between the main characters. In Wild Highway, former lovers are reunited and given another chance at happiness, but the journey to get there is riddled with roadblocks and potential heartache.

After selling her successful company and leaving behind her fast-paced, superficial life in Boston, Gemma Lane sets off to complete her friend, Londyn’s, mission to make a special delivery to an old friend in California. Much like Londyn, though, her road trip doesn’t go quite as planned. A whim finds Gemma stopping in Montana to visit Katherine, a friend that she left behind in search of a better life. Her effort to make amends also includes a meeting with her old flame, Easton Greer. Both the man and the ranch he runs hold memories that are dredged up upon her return, bringing their unfinished business and lingering feelings to the forefront of their tension-filled reunion.

For Gemma, the narrative is a journey of self-discovery and reconnecting with the wild, carefree person she used to be. Despite the initial resentment and animosity stewing between them, Easton is largely responsible for Gemma’s transformation from the polished workaholic of her adulthood to the happy, adventurous person she was when she first meet him. As Gemma chips away at the anger and bitterness that Easton held onto after she left, he’s busy stripping away the armor she’s built around herself as a result of her reluctance to trust others and display vulnerability. The process is painstaking, overwhelmingly emotional, and intensely poignant. The pain and anguish that’s evoked not just from dredging up Gemma’s past, but from the complicated relationship she has with Easton, wreaked havoc with my emotions, but I loved every single minute.

I could probably count on one hand the amount of authors whose books have made me cry, but something about Devney Perry’s writing resonates with me in a way that’s incredibly profound. The complexities of her characters and the intimate and passionate love stories she crafts have kept me captivated by her books, but she’s truly outdone herself with the Runaway Series. I gave Runaway Road 6 Stars because there wasn’t a single thing that could’ve made me love the book more. Wild Highway is just as amazing, if not more so, and I’d be remiss if I didn’t give it 6 Stars as well.